Rising Above the Best!

The focus over the past two months has been on training.  This is currently split down two avenues; with the West Bridgford Detachment of Nottinghamshire ACF, who we proudly share our superb new building with, and also multi-Squadron activities enabling us to spread our wings outside of the West Bridgford bubble!

Firstly I have to congratulate all the Cadets, Civilian Committee and Staff of 209 on a superbly successful Annual Formal Inspection [here].  This was my first one in charge of a Unit and it was a very proud moment.  The evening consisted of an inspection of the Squadron from Wing Commander then followed into a display of what training with 209 is all about.  This was our opportunity to show how well we work with the ACF!  The activities on show were a lecture to the NCOs on the roles of commanders within a platoon in the field, various leadership exercises focusing on different Army and RAF ranks and finally a multiple flight simulator experience of both a “sit in” simulator and a UAV simulator. Here I must say that the ACF’s flying skills were surprisingly good, we better start upping our game!

The Wing Commander has asked me to pass on his congratulations to the Squadron and offered some wise words on how to continue pushing the Squadron forwards to be the best in the Wing over the coming years; the challenge has been set!

Councillor Purdue-Horan, the Mayor of Rushcliffe, along with the Mayoress visited us all in West Bridgford and inspected both Units stood together on parade in a formal inspection [here].  This was a great opportunity to show off what we can do in the Cadet Forces and how productive our Joint Forces approach to training is. I am also getting very excited about making a very special announcement in the next couple of weeks, so watch this space!

We have also been making the most of the Great British Summer by playing a variety of different sports with the ACF and we are very grateful to staff from both Units for making this happen. They Cadets always seem to have a great time!

Any military based establishment relies upon it’s command structure in order to function.  As such a young Squadron we have to face the challenge that we do not have the quantity of older more experienced Cadets to make things comfortable. However, that said, the Cadets currently with rank are performing a superb role and part of the staff teams role is to provide training for those commanders and to help develop new ones.  As such we recently ran a joint Potential-NCO training course along with a concurrent NCO training course in partnership with 2229 (Loughborough) Sqn. The courses served to develop and challenge potential new Corporals, along with developing the skills and teamwork of those currently in post.

The Great Central Railway is a Britain’s only mainline steam railway and runs from Birstall to Loughborough.  Every year they host a WWII weekend where re-enactors  come together for a huge public weekend display of history. 209 helped out with the successful running event and in particular we took part in the act of homage on Sunday afternoon where thousands of poppies were dropped from an aircraft overhead. Have a look at the photos below!

It gives me great pleasure to announce that Sgt Brock has no only successfully passed the selection process at RAFC Cranwell’s Officer & Aircrew Selection Centre, but has also completed her Initial Officer Training and had been awarded the rank of Pilot Officer.  This is a superb achievement.  But don’t panic because I also got promoted to Flight Lieutenant so she isn’t catching me up just yet! 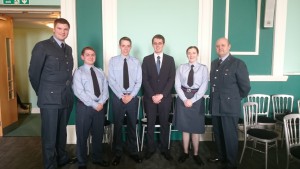 Each year Loughborough University open up nominations for the TS Shipman prize which is awarded to a University student who has developed relationships between the University and the local community.  As the old Training Officer at 2229 (Loughborough) I was pleased to see the staff, who were students at the University, fulfilling this criteria so naturally I put the nomination in.  The award is internal to the University so you must be a student of staff there to nominate and it was superb to hear that they won! For the full story see here, well done!

We have a media star among us, Cdt Kapasi featured on BBC’s The One Show where he wore his uniform in a family competition. You did the Corps proud!

Wing Field Day is over and the results are in. We are still near the bottom, but better than last year. I think the excuse that we didn’t have a building to train in is justified but no excuses next year. We’re going for top 10, ambitious but achievable!

You may have seen from other posts that Fieldcraft and “Military Skills and Tactics” is starting to gain momentum [here, here and here].  As a Squadron we will be grasping this with both hands, harnessing my qualifications along with the experience of our new Service Instructor, Cpl McCallum RAF.

There is so much more not covered here, but I hope this gives you the inspiration to support the Squadron, Cadets and Staff!