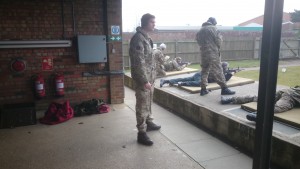 It’s not all about the development of Cadets at 209 (West Bridgford) Squadron, Royal Air Force Air Cadets. Last weekend saw three members of Staff travel to different areas around Central & East Region Air Cadets to further develop themselves and others.

Flying Officer Simon Howroyd has been part of Central & East Small Arms Training Team (CESATT) for just over two years. Last weekend the SATT taught marksmanship principles, danger areas & safety rules, how to zero a cadet weapon, coaching and the planning process for cadet live fire marksmanship training (LFMT). Candidates were also instructed in setting up a temporary air rifle range. “The shooting courses offered by CESATT are the fundamental enabler for shooting in the Corps. You have to have a high level of discipline, leadership and management skills in order to qualify as an RCO which develops a staff members personal portfolio.” said Flying Officer Howroyd.

Flight Sergeant Shane Grice was also on this course but as a student. Shane will be back to RAF Wittering on this weekend for the second part of the course and in hope he passes his assessment to become a qualified Range Conducting Officer. “I am finding the RCO (Range Conducting Officers) Course very rewarding. As a cadet I always thought it was an easy job standing up there shouting orders! Well I was wrong its a lot more in depth than that.With lots to learn about safety procedures, marksmanship principles and different positions that we are aloud to fire the rifle.

I am looking forward to doing my assessment this weekend and hope to be a qualified RCO on Sunday evening.”

On Saturday, Sergeant (ATC) Jade Brock travelled to 1F (City of Leicester) Squadron for a meeting with the Wing Adult Training Team to formulate plans on how to push the Leadership & Development Centre forward. The Wing plan to provide courses for adults, which include Civilian Instructor Induction Course, Prospective Uniform Course, Squadron Adjutants Workshop and the Squadron Training Officers’ Workshop. The team used this day to look at the current course material and revamping some of the content and also looking at the implementation of upcoming courses such as the new OASC Training Day.