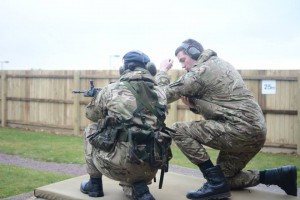 Fg Off S. Howroyd also travelled to RAF Wittering over the weekend as part of the Central & East Small Arms Training Team (CESATT). CESATT were completing their first meeting of 2015 on Saturday which focused on team continual professional development (CPD).

This included an update on shooting policy, the planning of courses for 2015, weapons handling tests and range rehearsals in preparation for the forthcoming short range, Range Conducting Officer course in February.

Sunday saw Squadrons from South and East Midlands Wing at RAF Wittering for a day of shooting so this enabled Cadets rather than the Staff time rehearse as firers, involving firing from the kneeling position.

Of particular excitement there are plans afoot for Small Arms Training Team to start running a Regional Military Skills course involving blank rounds and pyrotechnics, which is intended to be an introduction to the subject before progressing onto Junior Leaders. Fg Off S. Howroyd is heading up these plans with CESATT using the skills learnt from his time in the Territorial Army and his qualifications gained last year with the Corps, putting 209 (West Bridgford) Squadron, Royal Air Force Air Cadets back in the limelight again.