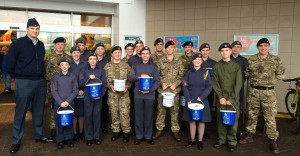 The weekend saw the two organisations put their competitiveness aside to pack bags at Morrisons in Gamston. In total the cadets raised just over £2,000 for their unit funds which will go towards training equipment for the benefit of the Cadets.

While there the cadets helped run a tombola in store which raised £500 for hospice support charity Sue Ryder on behalf of Morrisons. Liz Beddal, the community coordinator for Morrisons Gamston praised the Cadets for their work. “It’s great to see these young people working together to raise money, not only for themselves but also for causes we at Morrisons support.”

Flying Officer Simon Howroyd of 209 Squadron commented, “This is the first of many joint ventures we have planned. It’s fantastic that our first event has been such a success.”

West Bridgford ACF Cadet, Sergeant Chris Chrimes said, “It’s a good change working with the Air Cadets. There’s no way we would have raised so much by ourselves.”