The parade was organised by the South and East Midlands Wing Warrant Officer, Dan Haywood and saw organisations march from three separate locations to the Old Market Square. 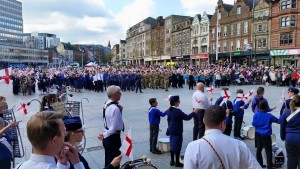 Each individual secretly carried a St George’s flag and all organisations came together waving their flags to mark the celebration of the parade. To finish the celebration Robin Hood got everyone involved to perform Mexican waves following a speech from Sir John Peace, Lord-Lieutenant of Nottinghamshire.