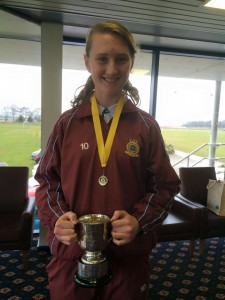 Katie was one of four Cadets in the Junior Women’s category that got selected to represent South and East Midlands Wing Air Cadets.

The race took part at RAF Cranwell and included the dreaded ‘Cardiac Hill’ along the route.

Katie and the rest of the Junior Women team celebrated with gold medals coming 1st against the five other Wings, taking home silverware.

Along with 1st place for Junior Women the Wing also walked away with two other 1st place trophies, a 2nd and a 5th place, resulting in South and East Midlands Wing winning the overall trophy.

Katie has also been selected to represent Central and East Region at the Corps Cross Country Championship later this month!