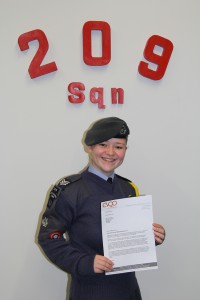 Flight Sergeant McDonald was promoted following a successful period as a Sergeant which saw her involved in many activities.

Grace has completed her INCO, SNCO and MOI Courses, was part of the 209 Squadron 2013 Ensemble team, winning at a National level. She has also been selected as one of the top 24 in this year’s Duke of Westminster Award, along with attending the first ever run Drill and Ceremonial Camp – parading with rifles in front of Air officer Commanding 22 Group (Air Vice Marshall Turner).