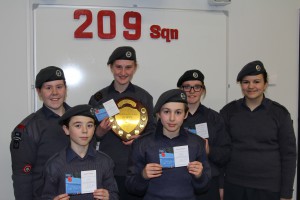 Starting back in October, 209 were asked to join other Cadet organisations at Nottingham Forest Football Club for the launch of 2014’s Poppy Appeal and the selling of the first poppy to Col. Richmond the Vice Lord Lieutenant of Nottinghamshire. Cadet Sergeant McDonald was chosen to sell the first poppy, whilst all other Cadets and Staff lined the pitch to a standing ovation.

209 were then asked to return the following Saturday on the 1st November with other Cadets from South and East Midlands Wing, this time in Nottingham town centre. They spent the day competing against the Army Cadets to try and raise the most amount of money! A fantastic total of £1,339.19 was raised that day.

The Squadron then spent a Saturday morning back on November 8th in West Bridgford before heading off to a further Poppy Appeal event in the afternoon. The fundraising totaled 591.71 for just a few hours!

Straight after West Bridgford 209 Squadron returned to Nottingham Forest Football Club, bringing again other Squadrons with them from South and East Midlands Wing. Another magnificent total of £1,163.27 was raised for the Royal British Legion Poppy Appeal.

After all of the events 209 (West Bridgford) attended we were hoping for a fantastic figure and of course from all of the hard work, effort and time that was put into these fundraising events. 209 raised a whopping £3016.89!

With all of the figures in we could finally announce last years winner of the Poppy Appeal trophy at 209. A big congratulations went to Cadet Katie Rogers, it was a close competition!

Well done to all that turned up, same again this year!