Two Cadets from Nottinghamshire Army Cadet Force (ACF) and the Air Training Corps (ATC) have been honoured for their dedication to the youth organisations by being appointed ‘Mayor’s Cadet’.

Councillor Francis Purdue-Horan, Mayor of Rushcliffe, appointed the Nottinghamshire’s first-ever Mayor’s Cadets in the area to show his support and recognition of the achievements the two young people selected have made over the past year.

Cadet Sergeant Chris Chimes, of Nottinghamshire ACF’s West Bridgford Detachment, and Cadet Flight Sergeant Grace McDonald, of the ATC’s 209 (West Bridgford) Squadron, were presented with their certificates of appointment and their specially designed badges featuring the Borough’s crest following a reception at the Civic Offices in West Bridgford on 24th September 2015.

The Cadets will now accompany the Mayor to a variety of functions and events until May  2016, when the new, incoming Mayor of Rushcliffe will appoint another two representatives from both the ACF and ATC within the Rushcliffe Borough Council boundary as successors.

Cadet Sergeant Chris Chimes, from Nottinghamshire ACF, said: “It’s been a great year for me so far, and I’m so pleased I was put forward for this new position by my detachment staff. I recently completed the Cadet Leadership Course and was promoted to Sergeant in July. This October, I’m doing my Senior Cadet Instructor’s Cadre so being appointed Mayor’s Cadet is something I am really proud of.”

Second Lieutenant Richard Etherington, Detachment Commander of the ACF detachment in West Bridgford, said: “I genuinely believe that the ACF and ATC in Nottinghamshire produce some of the best young people in the county, and it has been a pleasure to work together to create such a rewarding experience for our Cadets.”

Flight Lieutenant Simon Howroyd, Commanding Officer of 209 (West Bridgford) Squadron, said: “Throughout the year we not only teach many young people of Rushcliffe useful life skills and good citizenship, we also help out at many different community events in the Borough.  It is great for the Squadron to get recognition from the Mayor and this is an award that Cadet Flight Sergeant McDonald and Cadet Sergeant Chimes will have on their CV forever.  A very high standard has been set and this will inspire many other young people of Rushcliffe to achieve great heights.” 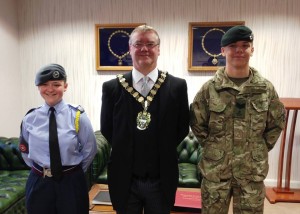