The week consisted of learning rifle drill in the mornings and preparing for the final parade in front of reviewing officer Air Commodore McCafferty, Commandant Air Cadets at the end of the week at RAF Honington. The afternoons were more relaxed with activities including paintball and archery, allowing for the flights to get to know each other better. 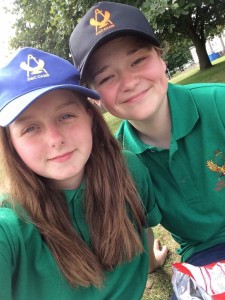 During the week there was an opportunity to gain Heart Start (basic first aid consisting of things like learning the recovery position and CPR) and Communications (how to use radios) qualifications. Additionally, to add even further to a week of drill there was a Cadet Drill Course which both Sergeant Rebekah Oldknow and Flight Sergeant Grace McDonald passed, enabling them to teach drill effectively on the unit using the set mutual that the Air Cadet Organisation follow which is in line with our parent organisation, the RAF.
For FS McDonald this was her second year in attendance, making her one of the more experienced Cadets present. This led to a chance to help other cadets with the rifle drill manoeuvres, even giving one on one tuition to help prepare for the big parade on the Friday afternoon.
On Friday, the D&C Camp were assisted by the Air Cadet National Marching Band who provided the music for the whole parade. This really proved how well the ‘bandies’ and the ‘drillies’ can work together with hopes that more can be done as a united front for the Corps’ 75th anniversary next year.
The parade was also made up of a continuity display with over 250 cadets moving in time, which beats the British military’s record of 90 people in the same continuity sequence. It was a proud moment for all present, with a massive round of applause and smiles all over upon the finishing exclamation of ‘on guard’ echoing out for all to hear.
Sgt Oldknow said “the week was really tough but enjoyable nonetheless; well worth all of the bruises! To see everything come together at the parade in front of the Commandant proved that all of the hard work put into the week paid off. Bring on next year!”