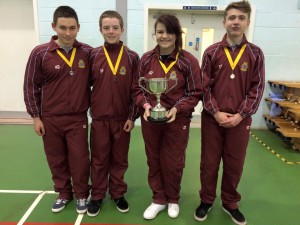 Cadet Abbigail Byrne was called up last minute to represent the Wing in which she manages to walk away with not only a Wing Blue, but also a Gold Medal as the Wing won 1st place with 13 points, storming ahead of the other 5 Wings!

Corporal Will Charnley, Cadet Cameron Butcher and Cadet James Young spent the day in extremely cold and wet conditions outside representing the Wing’s Junior Boys Rugby team. All of the Wing teams were of a fantastically high standard and South and East Midlands Wing managed to walk away with Silver medals only one point behind Gold!

As a further achievement Corporal Charnley and Cadet Young have been asked to attend the trials in April for selection in the Central and East Region’s Junior Boys Rugby team!

Congratulations, a fantastic effort from all and a massive thank you to the mums that allowed their sons and daughters to attend the event on Mothers Day!