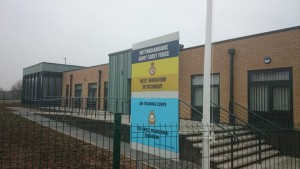 After being homeless for more than two months 209 (West Bridgford) Royal Air Force Air Cadets have finally moved into their new £1 million base.

The squadron moved out of their crumbling old premises, also on Wilford Lane, after more than 53 years in residence. The centre, based on Wilford Lane, will be used by 80 young people from the Army Cadet Force and the Air Training Corps and it includes a new training hall, radio rooms, fully interactive lecture rooms and plenty of room to store essential training equipment.

Sixteen-year-old Cadet Sergeant Grace McDonald was “chuffed” the 209 (West Bridgford) Squadron now had a place to call their own.

The New College Nottingham High Pavement student said: “First they said we could move in, in April and then November, so it did feel a bit like it was never going to happen. But now it’s open and ready to use and I’m really glad.

Grace said: “There is so much room now, we can actually teach in the classrooms, we are not fighting the projector for space.”

Wing Commander Nigel Dickinson, Officer Commanding South and East Midlands Wing, said: “Our sincere thanks to everyone involved in this project. We now have a superb building, which is fit for purpose, and provides the local squadron with a fantastic opportunity to grow and develop its presence in the locality.”

If you’re aged between 12 (School Year 8) and 17 and are interested in becoming a Royal Air Force Air Cadet, 209 (West Bridgford) Squadron are holding a recruitment evening on Monday 30th March 2015 from 19:00 to 21:00 at our West Bridgford Joint Cadet Training Centre on Wilford Lane.