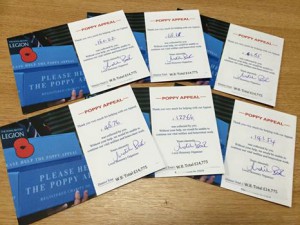 The final results from 209 (West Bridgford) Squadrons efforts within the Poppy Appeal are in!

209 (West Bridgford) Squadron, Royal Air Force Air Cadets spent a morning in West Bridgford back in November 2014 to help raise funds for the all important Royal British Legion before heading off to a second event at Nottingham Forest Football Club again for the Poppy Appeal.

All who attended put a tremendous amount of effort in and even though it was a cold and miserable day, morale stayed high which kept the pennies and pounds rolling in!

The final figure for a morning of fundraising in West Bridgford totalled a whopping £591.71.

The announcement of the figures meant the Squadron could finally award the Poppy Award for 2014. Stay tuned to find out who won!