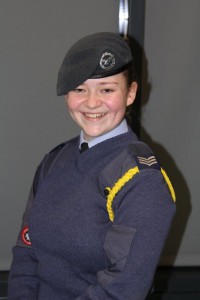 After spending a day at 1211 (Swadlincote) Squadron back in January being taught the best methods of instruction, Sergeant McDonald’s next task was to plan and prepare a ten minute lesson to teach Cadets at 209 (West Bridgford) Squadron. This would be fully assessed by her Wing Staff Officer, Squadron Leader Wilson.

Once she had completed her assessed lesson she sat down with Squadron Leader Wilson for a debrief on how she did. Fortunately she showed the required qualities and passed, allowing the Wing Staff Officer to award her the Instructor Cadet Lanyard.

Cadet Sergeant McDonald’s lesson was based on the Cadet ranks within the Air Training Corps and how to differentiate between them.

Sergeant McDonald was clearly pleased to have received her lanyard “I am glad to have passed because it will enable me to be an asset on my unit as gaining this qualification will not only benefit myself on my development as an NCO, but the Cadet’s learning as well.”