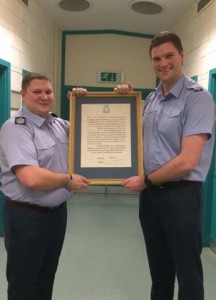 The phrase New Year, New Start proves fitting for 209 (West Bridgford Squadron). 2015 will see the opening of a brand new Joint Cadet Centre for the Royal Air Force Air Cadets and the Army Cadet Force within West Bridgford. It has also seen the arrival of Fg Off RAF VR(T) Simon Howroyd, who will be taking up the position of OiC 209 Squadron.

In 2006 Simon studied a Masters Degree in Engineering at Loughborough University where he also joined 158 (Royal Anglian) Transport Regiment as an Officer Cadet in the Royal Electrical & Mechanical Engineers and where he assumed the position of 2IC.

During his 7 year service with the TA, Simon transferred to the Royal Logistic Corps and competed for three years at the TA Operational Shooting Competition and TA Pistol Championships and won the former in 2009 and 2010. Simon was ranked 19th for rifle on the L85A2 and 8th for pistol. Simon left the TA in 2012 to focus on his Air Training Corps career and his PhD in Unmanned Aerial Vehicles at Loughborough University. In 2012 Simon gained a commission with the RAF VR(T) and was awarded the rank of Pilot Officer. After a brief stint as Squadron Adjutant & Squadron Training Officer at 2229 (Loughborough) Squadron, Simon was promoted to Flying Officer in August 2014, and assumes command of 209 (West Bridgford) Squadron on the 5th January 2015.

Simon is also a proud member of 6 Small Arms Training Team where he instructs and assesses instructors in coaching and range running.

Fg Off RAF VR(T) Simon Howroyd is looking forward to his venture at 209; “Taking command of a 209 Squadron is the pinnacle of my career in the Air Cadet Organisation so far. It makes me extremely proud to have the opportunity to lead such a dedicated Squadron of Staff and Cadets and it is going to prove a very exciting year, particularly with moving into a brand new Joint Cadet Training Centre building in a few weeks. With such a wealth of different people and different skill sets on the Squadron, I look forward to leading the most excellent Cadet Experience achievable in the Corps today.”

With the new Squadron not yet finished there was no official handing over of the keys, instead Flt Sgt (ATC) Shane Grice handed the custodianship of the Royal Warrant to the new OiC6, the approval of the formation of 209 (West Bridgford) Squadron, which will soon take its permanent position on the new buildings wall.