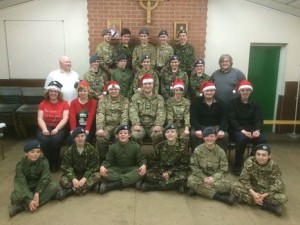 The cadets, all ranging from between 12 and 19-years-old, had the opportunity to complete challenges set in pioneering, fieldcraft, tunneling, rope exercises, PT, orienteering and of course show of their dancing skills (or lack of) within the Saturday night disco.

On Sunday the Cadets were spoilt to fantastic silver service dining as they enjoyed their Christmas dinner provided by the Staff.

Well done to those who again won the infamous paper plate awards.

Also a Happy Birthday to CI Barry Hanson, who celebrated his 63rd Birthday on Christmas day.

As the year draws to a close, 209 (West Bridgford) Squadron, Royal Air Force Air Cadets can look back on a year full of activities, with Cadets achieving BTEC qualifications, some achieving Duke of Edinburgh awards, lots of fundraising for the Royal British Legion, attendance at the first Corps Drill and Ceremonial Camp, selling Nottingham’s first poppy to the Vice Lord Lieutenant of Nottinghamshire and many passing their syllabus training completing their examinations and achieving Master Cadet status.

The Squadron also saw some Staff leaving, moving onto new adventures, some Staff returning, a new OiC and the old building finally being knocked down, 209 are definitely ready and waiting for the new unit to be completed ready to move in.

Hope all have had a very Merry Christmas and here is wishing a very happy and prosperous New Year for 2015, it is certainly going to be a busy one for 209.